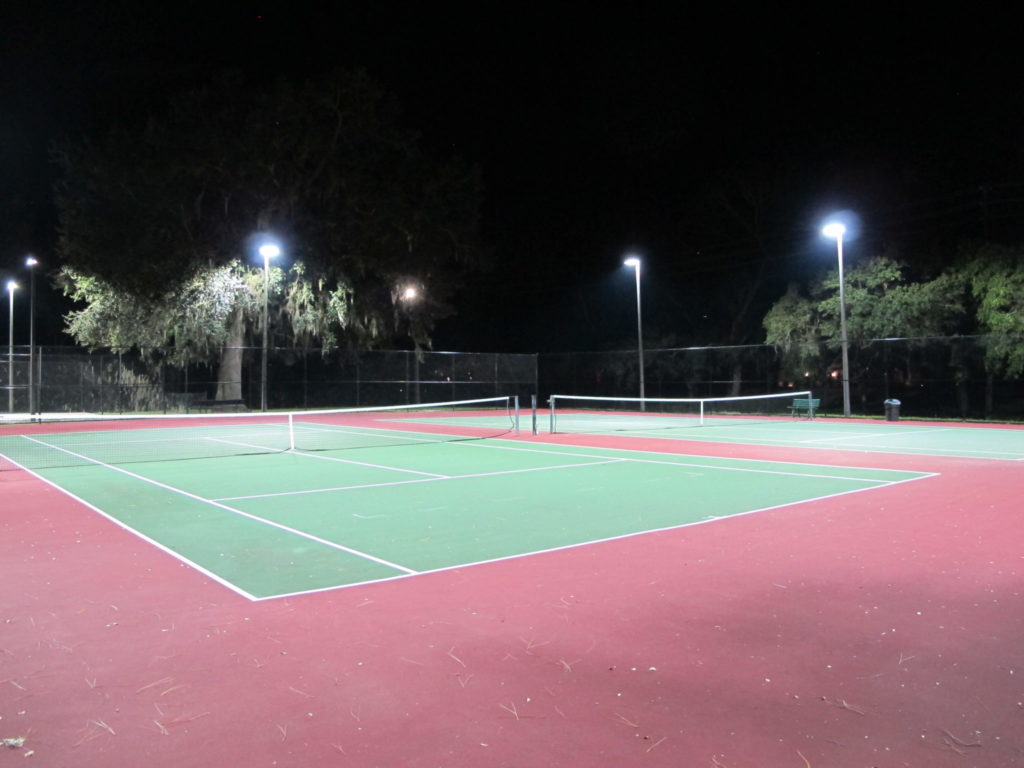 “LEDs are just ideal for the outdoor recreational sports setting,” Brown said. “Not only are they less expensive to operate and maintain, they reduce glare and improve playing conditions. They’re a winner all around.”

Since 2018, Arkon has installed LED lighting over a significant number of tennis courts, as well as several basketball courts across the state of Florida. Arkon is not alone. Countless universities across the country have turned to LEDs for their athletics facilities, and installation data indicates municipal and private sports court managers countrywide are turning to LEDs to save money on high-quality site lighting.

According to Brown, tennis courts thrive under LED fixtures, usually hung at 18 to 22 feet. Unique lenses, recessed LEDs and directional lighting reduce glare. And the lights’ optical systems are optimized to illuminate courts’ primary playing area (PPA). The PPA extends 10 feet behind each baseline and 6 feet beyond the sidelines.

The light levels inside the PPA are measured through photometric studies, which Arkon completes in-house for every court lighting project. The criteria measured through the photometric studies include the average maintained horizontal footcandles, minimum maintained footcandles and maximum uniformity ratio of footcandles. The measurements determine the specific class of lighting installed on the court. The classes are based on play level—for example, Class I is professional and Class II is collegiate.

“We are very happy with the end result of the product—we are very happy with what Arkon came up with,” Tampa Palms North Owner Association Manager Deborah Paul said. “On the older halide fixtures, every time the lights went out, we had to bring out the lift, and it was quite expensive.”

“LEDs are a no-brainer for so many market segments, but perhaps none more than court lighting,” Brown said. “I’ll say it again—we expect this market to keep growing. And we’ll be there for folks when they decide to make the move.”

Email info@arkonpower.com to learn more about this or any of Arkon Power’s other projects. 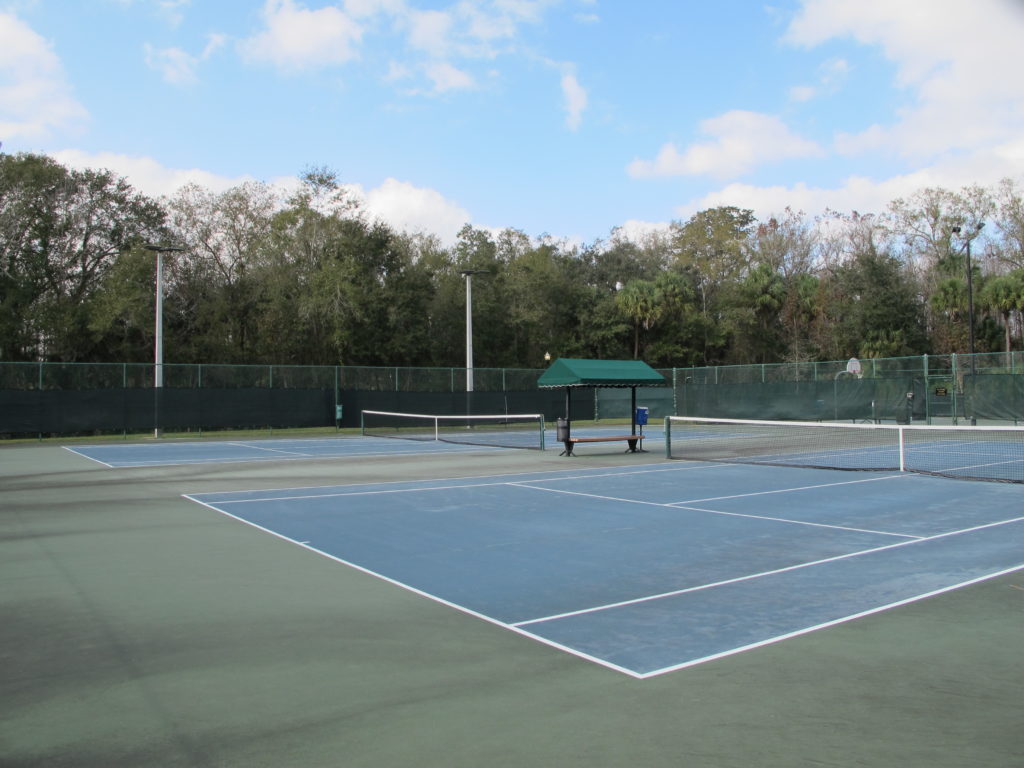 “The first lighting was okay, but it just wasn’t great,” said Deby Paul, Tampa Palms North Owner Associations manager. “LEDs are supposed to provide much better lighting and huge savings on electricity, and we didn’t quite get that.”

Working alongside court surface provider Welch Tennis, Arkon was able to provide Paul and Tampa Palms exactly what they wanted.

“We were able to cut their power use by more than half while giving them 50% more light,” Brown said.

Tampa Palms isn’t the only tennis court Arkon has upgraded. The LED provider has completed multiple court projects for the city of Safety Harbor and Advenir Magnolia in Orlando, and Arkon recently signed a contract on a large new construction project for LED lighting on tennis courts and pickleball courts in the Tampa Bay Area.

The new lighting at Tampa Palms, which reduced maintenance costs significantly compared to the metal halides

that preceded the community’s first set of LEDs, has been a hit with Tampa Palms residents, Paul said.

Email Info@ArkonPower.com to learn more about this or any of Arkon Power’s other projects.

The city of Safety Harbor has gone all-in on LED lighting upgrades, and Arkon Power served up a winner for a recent installation high above several local tennis and racquetball courts.

“The city has an initiative to try to use LED products as we go forward with projects,” said Dave Carrozza, Safety Harbor’s maintenance superintendent. “We were looking for a vendor that would be a turnkey operation, and that was one of the things Arkon came to the forefront on.”

Because the lighting would be used to illuminate a recreational area, glare was a primary concern. But Arkon worked with the city to ensure it wouldn’t be an issue, and Carrozza said local tennis and racquetball enthusiasts have been pleased with the results.

“We haven’t gotten a single complaint,” Carrozza said. “That was our biggest concern.”

Safety Harbor is committed to using LEDs because of their energy efficiency and reduced maintenance costs, according to Carrozza. In addition to offering the turnkey solution the city was looking for, handling the job from sourcing to installation, Arkon’s proposal stood out for cost savings and extended warranties. “It comes down to the money standpoint and efficiency,” Carrozza said.

The Safety Harbor project was Arkon’s fifth tennis court retrofit. “More and more customers are realizing LEDs are ideal for athletic settings, not only for the power and maintenance savings, but also for the improved lighting on the playing surface,” Brown said. “We anticipate this being a growth market.”

Email Info@ArkonPower.com to learn more about this or any of Arkon Power’s other projects.